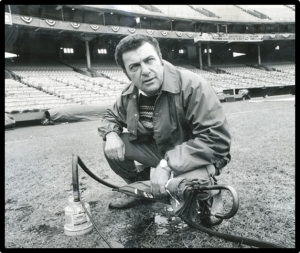 Pat Santarone draining the outfield at Memorial Stadium in Baltimore, MD before a 1979 World Series game.

Mr. Santarone spent 22 years as Head Groundskeeper for the Orioles.  Beacon Athletics own Paul Zwaska served 6 years under the watchful eye of Pat as his assistant before taking over for Pat upon his retirement before the 1991 baseball season.  Paul was on hand for the award banquet and ceremony at Coor’s Field in Denver and spoke to the audience about Santarone’s life and legacy in baseball.

Previous inductees into the MLB Groundskeeper Hall of Fame include Emil Bossard (Indians), George Toma (Royals), Joe Mooney (Red Sox), Dick Ericson (Twins) and Harry Gill (Brewers).  The trophy for the Hall of Fame is named after Gary VanDenBerg who was the long-time Brewers Head Groundskeeper who lost his battle to cancer in October of 2011.  All Hall of Fame members names are inscribed onto the trophy once inducted. 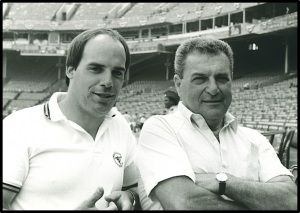 To be considered for induction to the Major League Baseball Groundskeeper Hall of Fame, a person must have ceased to be employed full-time in the profession for at least five years and have made a significant contribution to groundskeeping and/or the sports turf industry at the Major League level. An individual’s impact on the community will also be considered. The names of nominees will be submitted to the Major League Baseball Groundskeepers association for a vote. A nominee must receive 75% of the vote of all active association members.

Beacon Athletics is proud to honor the memory of Pat Santarone and his many great contributions to baseball groundskeeping.   Much of what Pat taught Paul is now passed on to many of Beacon’s customers through the advice and education that Paul provides.

The Puddle Sponge
Watch it in action!
[product_brand_list]