So your season is over and you are shutting down your fields and complex for the year. Don’t forget about your netting!

Many of you have net backstops, barrier netting to protect critical areas, batting cages and soft toss station netting, football, soccer and lacrosse end zone netting. If possible, retracting the netting for the off-season removes the stress from the poles and prevents inclement weather from damaging your nets. But just as dangerous in the late fall and winter is the possibility of mice and rabbits using pieces of your net for building their winter nests. Yes, it is time for that annual battle of mice and man.

There are several ways to help protect your nets from rodents during the offseason. If you remove the nets entirely from your system’s support structure, then purchase large enough hard plastic storage containers to fold and stow the nets in. Be sure these containers have tightly sealing lids so the little intruders can’t flip the top open just enough to enter. Don’t use cardboard boxes as these are easily breached by the rodents unless, of course, you have an aggressive pest control program in and around the area you store them. 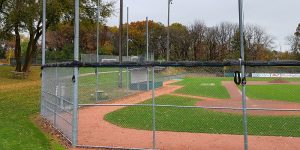 We have backstop nets at our little league facility that are mounted on top of a 10′ high chain link fence. When we lower those 15′ to 20′ high nets for the winter, we bundle and bungee those nets right on the top of the 10′ high chain link as you see in this picture. It is easier than fully dismantling the net system and when stowed on top, it is away from all rodents. In ten years we have yet to have any rodent damage to these nets.

For those who have netting systems that run to the ground but do not retract or can’t be removed from the structure, it would be wise to disconnect the net at the base and raise it up 3′ to 4′ to get it out of the reach of mice and rabbits. In fact, Beacon’s engineer and netting design experts never recommend constructing netting systems that come all the way to the ground. They strongly urge customers to keep their nets several feet off the ground out of reach of those chewing furry creatures. If they must go to the ground like barrier nets for soccer, football and lacrosse, make sure the nets are removable so they can be taken off after a game or practice. Or, make them hoistable so they can be raised from the bottom up several feet off the ground when not in use. 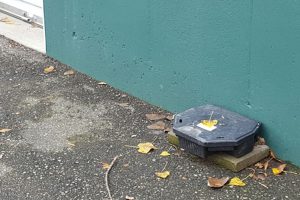 As stated earlier, as a second layer of defense use rodent control bait stations both outside and inside your storage rooms where the nets are stored during the offseason. The more proactive you are at protecting your net investments, the more you decrease the threat of damage. Then, and only then, can we groundskeepers possibly declare victory over the mighty mouse.